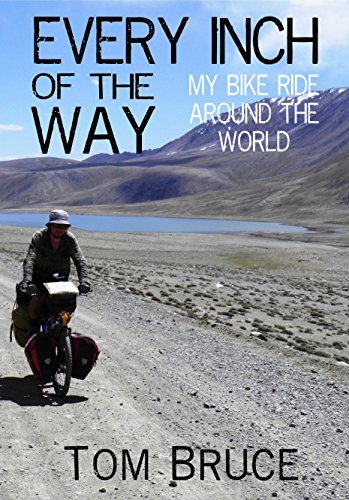 Every Inch of the Way; My Bike Ride Around the World (English Edition) por Tom Bruce

Tom Bruce con Every Inch of the Way; My Bike Ride Around the World (English Edition)

"A challenge that tested Tom to his limit but in return gave him more than he could ever have imagined."
- Bear Grylls

“Every Inch of the Way is a great page turning adventure which is as close as you can get, without actually saddling up and pedalling yourself into the unknown. It takes real magic to turn a great adventure, into a great book. For one thing, most people can't relate to the mind-set of the long distance cyclist and I found myself laughing along to Tom's thoughts and observations, wondering if they were in - jokes, shared by those who had seen the world at the speed of a bike, for example his relationship with Serbia's stray dogs! . But his anecdotes have a great balance of the cultures and places, as opposed to just inward reflections, so I am sure would be enjoyed by anyone with an interest in travel and human experience. A lovely story, written from the heart.”
- Mark Beaumont (around the world record breaking cyclist and adventurer)

This was the journey that changed my life. I had dreamed about it for so long, but I never actually thought I'd complete a trip around the globe by bike. It started off as seed in the back of my mind, that grew and grew until the idea consumed me. In March 2011 I set off on the adventure of a lifetime, from my front door, across Europe, Asia and finally the USA. I spent nights in people's houses all over the world, slept in Yurts, camped with nomads, ate delicious food ranging from Tibetan stew to alligator meat, drunk home-made Georgian wine, was given clothes, partied with Kazakhs on the Caspian Sea ferry, saw photos of USSR soldiers in front of statues of Lenin, saw Stalin's house the Grand Canyon and the Great Wall. I cycled through sweltering deserts and over huge mountains. I overcame mechanical problems with the help of an Azerbaijani mechanic and illness due to the kindness of a Tajik Pamiri doctor. On the way I cycled with local people and friends, both old and new.

I've written this book to share my story and the amazing experiences that I had. It's not a book full of arty descriptions about beautiful places, it doesn't have any clever metaphors; it's just my story. It tells the story of a normal person spending nine months experiencing the world from the saddle of a bike. I've included bits of history, observations about people's daily life, comparisons of countries and my own opinions as my story is told. I only had one rule; I had to make it round the world on a bike: every inch of the way.
I hope you enjoy my story; it will be great to have you along for the ride...

The kindle version contains colour photographs from my adventure and the hard copy contains high quality black and white photos.