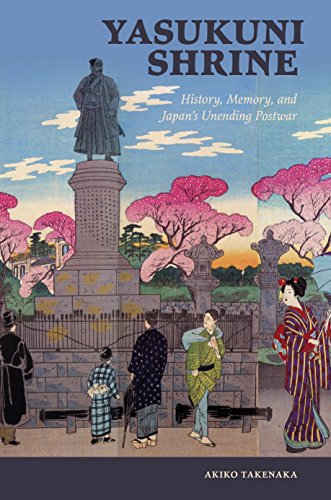 This is the first extensive English-language study of Yasukuni Shrine as a war memorial. It explores the controversial shrine’s role in waging war, promoting peace, honoring the dead, and, in particular, building Japan’s modern national identity. It traces Yasukuni’s history from its conceptualization in the final years of the Tokugawa period and Japan’s wars of imperialism to the present. Author Akiko Takenaka departs from existing scholarship on Yasukuni by considering various themes important to the study of war and its legacies through a chronological and thematic survey of the shrine, emphasizing the spatial practices that took place both at the shrine and at regional sites associated with it over the last 150 years. Rather than treat Yasukuni as a single, unchanging ideological entity, she takes into account the social and political milieu, maps out gradual transformations in both its events and rituals, and explicates the ideas that the shrine symbolizes.

Takenaka illuminates the ways the shrine’s spaces were used during wartime, most notably in her reconstructions, based on primary sources, of visits by war-bereaved military families to the shrine during the Asia-Pacific War. She also traces important episodes in Yasukuni’s postwar history, including the filing of lawsuits against the shrine and recent attempts to reinvent it for the twenty-first century. Through a careful analysis of the shrine’s history over one and a half centuries, her work views the making and unmaking of a modern militaristic Japan through the lens of Yasukuni Shrine.

Yasukuni Shrine: History, Memory, and Japan’s Unending Postwar is a skilled and innovative examination of modern and contemporary Japan’s engagement with the critical issues of war, empire, and memory. It will be of particular interest to readers of Japanese history and culture as well as those who follow current affairs and foreign relations in East Asia. Its discussion of spatial practices in the life of monuments and the political use of images, media, and museum exhibits will find a welcome audience among those engaged in memory, visual culture, and media studies.